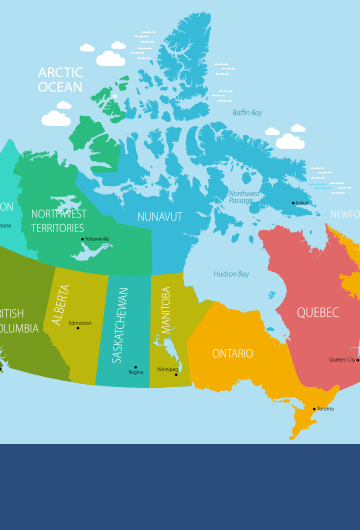 Canada’s provinces and territories have their own local needs for skilled foreign workers, which is why the Provincial Nominee Program (PNP) was created. Nine provinces and two territories, in close cooperation with the national Canadian immigration agency, have developed their own programs to attract foreign workers who have the occupations and skills that are needed in their part of Canada. The first step is to apply to the PNP of a specific Canadian province or territory. If that province or territory issues a provincial nomination, the second step is to apply for permanent residency with the national Canadian immigration agency.

Please note that the mainly French-speaking province of Quebec does not participate in the PNP, so foreign workers who want to live and work in Quebec should apply instead for the Quebec Skilled Worker Program (QSWP) which has its own eligibility requirements and procedure.

The different provinces and territories that participate in the Provincial Nominee Program (PNP) have developed their own eligibility requirements. In general, the PNP criteria will usually include one or more of the following:

The procedure to apply for a Provincial Nominee Program (PNP) may differ, depending on the particular province or territory in Canada, but it generally involves two major steps:

1. Apply for a Provincial Nominee Program (PNP) – Foreign workers can apply for the Provincial Nominee Program (PNP) of a participating province or territory through the “traditional” Non-Express Entry Stream, either online or with a paper application sent in the mail; OR an Express Entry profile can be filed online. If the foreign worker receives a provincial nomination, he/she can move on to the second step.

Foreign workers and their accompanying family members who immigrate to Canada through the Provincial Nominee Program (PNP) can enjoy many advantages. For example, Canadian permanent residents can live in Canada for an unlimited amount of time. They also have access to Canada’s world-class educational programs, which can provide them with excellent career opportunities. Canadian permanent residents are allowed to work in Canada legally and they have the option to start a business and/or own property. They are also entitled to free public healthcare and can apply for a driver’s license in the province or territory where they live in Canada. Furthermore, permanent residents who meet the criteria can sponsor certain family members for a Canadian visa. Additionally, they have the freedom to travel to and from Canada and have the opportunity to enjoy the peacefulness, prosperity, scenery and high-quality of life this amazing country is famous for. After they live in Canada for three years and satisfy other criteria, permanent residents can apply for Canadian citizenship and get a passport (which can open the door to travel around the world).

DISCLAIMER: This information is not and shall not be considered as expert or professional advice.

The CanadaImmigrationExpress.com website is owned and operated by a private Company, Global Worldwide Online Marketing Limited, Registration Number 10816710, Lynton House, 7-12 Tavistock Square, WC1H 9BQ, London, UK, which is a private international company that is not related to Canada’s government or the CICC and is not a member or agent of the CICC. The content available herein is not and shall not be taken as professional or legal advice. We make the best efforts to keep the information up-to-date, however, some terms presented on the website, including the immigration eligibility criteria, might change at any time. Copyright © 2021 All rights reserved. Reproduction in whole or in part without permission is prohibited.