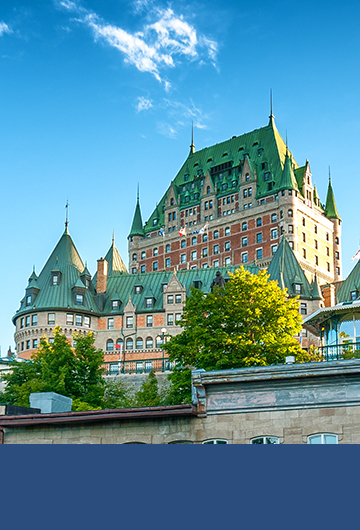 Quebec is a unique place to live in Canada, due to its history, culture, population and natural beauty. This vast region of Canada was originally settled by the French, whereas the rest of present-day Canada was settled by the British. As a result, the majority of people living in Quebec speak French (many also speak English). This is different from Canada’s other nine provinces and three territories, where most residents speak English (and many also know French). Quebec’s special French-Canadian culture further sets this province apart from the rest of Canada and helps to attract many tourists from around the world. In addition to being the biggest Canadian province, Quebec has the country’s second largest population and #2 economy (which is also among the top producers of new jobs in Canada). Furthermore, Montreal has the second largest population of any city in Canada and was ranked #21 for best quality of life out of 450 cities assessed in the 2018 Mercer Global Quality of Living Survey. People living in Quebec have access to quality education programs, including some of the best universities in Canada. If you and your family want to experience a high standard of living in Canada and you are a skilled foreign worker with good French language abilities, you may want to consider living and working in Quebec!

The Quebec Regular Skilled Worker Program (QSWP) is a points-based Canadian immigration program for skilled foreign workers and their families who want to live and work in Quebec. Points are given for different factors and a minimum number of points are required. The maximum points possible and the minimum points required will depend on whether a skilled foreign worker is unmarried or has a spouse/partner. There are additional eligibility requirements that must also be satisfied. In general, there is a two-step procedure to apply for Canadian immigration through the Quebec Regular Skilled Worker Program.

During the first step of the QSWP application process, a foreign worker will submit his/her Expression of Interest (EOI) through Quebec’s online “Arrima” system. The EOI contains the applicant’s relevant personal details, including information about his/her education, work experience, French and/or English language abilities, family situation, contact details, any validated job offer, current status in Quebec, and other information. An applicant can login to update his/her EOI if necessary. Quebec’s provincial authorities will then review the details in the EOI and if the applicant appears to meet the QSWP criteria, their EOI will be placed in the Expression of Interest Bank (EIB).

An applicant who receives the Certificat de sélection du Québec (Québec Selection Certificate) and Invitation from the relevant provincial authorities in Quebec can move forward to the second major step of the QSWP procedure. During this second step, the foreign worker will have 90 days to submit an application for a permanent resident visa to Canada with all of the required documents and fee(s) to the Canadian immigration agency. The relevant officials in Canada’s national government will review the Canadian visa application and documents, including the medical exam(s), and will conduct a security check of the applicant(s). If the visa application is approved by the national Canadian immigration agency, a Confirmation of Permanent Residency (COPR) will be sent to the immigrant, a permanent resident visa to Canada will be stamped inside of his/her valid passport, and the new Canadian permanent resident(s) will be allowed to move to Quebec. At the end of the second step of the QSWP process, the immigrant will need to pay the Right of Permanent Residence Fee (RPRF) and the separate fee for a Permanent Resident Card.

This is a brief overview of the major QSWP requirements and procedure and subject to change at any time by the Canadian immigration authorities. To find out which Canadian visa option you qualify to apply for, click here!

To learn if you are likely to qualify for the QSWP or another Canadian immigration program, click here!

DISCLAIMER: This information is not and shall not be considered as expert or professional advice.

The CanadaImmigrationExpress.com website is owned and operated by a private Company, Global Worldwide Online Marketing Limited, Registration Number 10816710, Lynton House, 7-12 Tavistock Square, WC1H 9BQ, London, UK, which is a private international company that is not related to Canada’s government or the CICC and is not a member or agent of the CICC. The content available herein is not and shall not be taken as professional or legal advice. We make the best efforts to keep the information up-to-date, however, some terms presented on the website, including the immigration eligibility criteria, might change at any time. Copyright © 2023 All rights reserved. Reproduction in whole or in part without permission is prohibited.